John Finger obtained his law license in California in 1985 and in Colorado in 1991.  After law school, he joined the U.S. Army and served in the JAG Corps from 1986-1993.  He was stationed in Charlottesville, Virginia, Augsburg, Germany,  Fort Bliss (El Paso), Texas and Colorado Springs (Fort Carson), Colorado.  He also spent time in Fort Hood, Texas and Fort Huachuca, Arizona on criminal cases.  He finished his Reserve duty at Fort Carson, Colorado.

John was also a Certified Financial Planner for 10 years.  When he saw the market going down, he advised his clients to get out.  Smart for the clients.  Didn't help John's income, though.

John bought an office building in Colorado Springs with a partner in 1996.  It was then that John did his first eviction.  Everything else went fine with that building.

John bought rental property in Denver, Aurora, Monument, Colorado Springs and Pueblo.  In 2006, he predicted that the market would turn lower.  He and his partner sold the building.  John sold many of his holdings but kept a few.

All during that bleak time, John continued doing evictions, contract work, creative financing and other legal work you'll see on the next page. He started doing foreclosures in 2011.  Unlike the big firms, he does them for small investors who no longer get payments from their buyers.   He continues his practice in all of those areas today.

John gets calls to help people with their real estate issues because he "walks the walk."  On a few occasions, he's been in court in his suit and tie in the morning, then in his grubbies in the afternoon, cleaning up after an irresponsible tenant.  90% of John's tenants are great: they pay on time, they keep the place up, and have respect.  We all just have to worry about the other 10%.

John sees clients in Colorado Springs, Pueblo and Monument and wants to expand to Castle Rock. 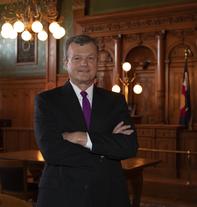 experiencing what you experience